We arrived just in time for the notorious Boston winter. We also arrived just in time for the release of Fallout 4, which takes place in a fictionalized version of Boston some 250 years in the future. The apartment we’re renting is only a few hundred feet from the historic Bunker Hill Monument, which in-game, has become a refuge for traders retired from travling the wasteland of the post-apocolyptic Commonwealth.

This morning, the sun was out and I had a little time to take some pictures of Bunker Hill for a comparison with its in-game representation.

This is a few feet from the entrance to my apartment, and I walk the dogs up to the Monument at least once each day. Monument St. doesn’t exist in the game; the closest I could find is this small alley with a similar view. Monument St. isn’t big, but it’s not quite an alley, either. Apologies I forgot to toggle the HUD in this one

In this picture, and in the next, my character’s back is to the river behind me. In real-life, there’s a couple blocks of low-income housing that is currently slated to be torn down, replaced with luxury condos. It’s ironic that the game omits this section of the neighborhood just as so many of the real-life government and Charlestown residents would like to.

IRL Toward BH from Lexington IG Toward BH from “Lexington” I’d say this was pretty well represented. I was very happy that the trees in the park were included. 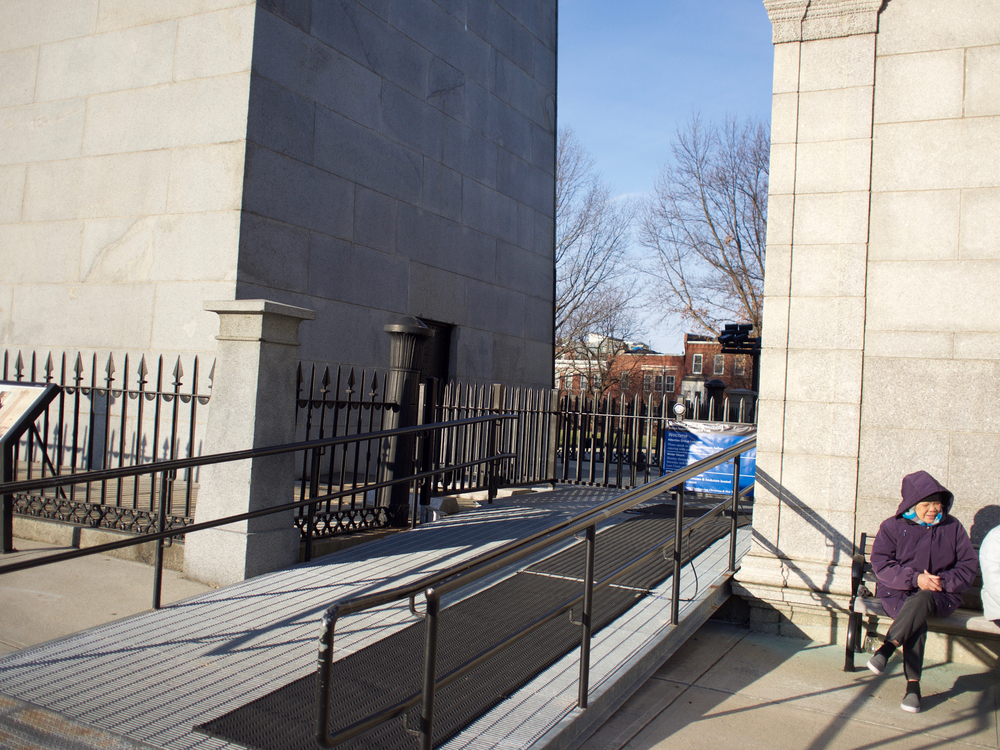 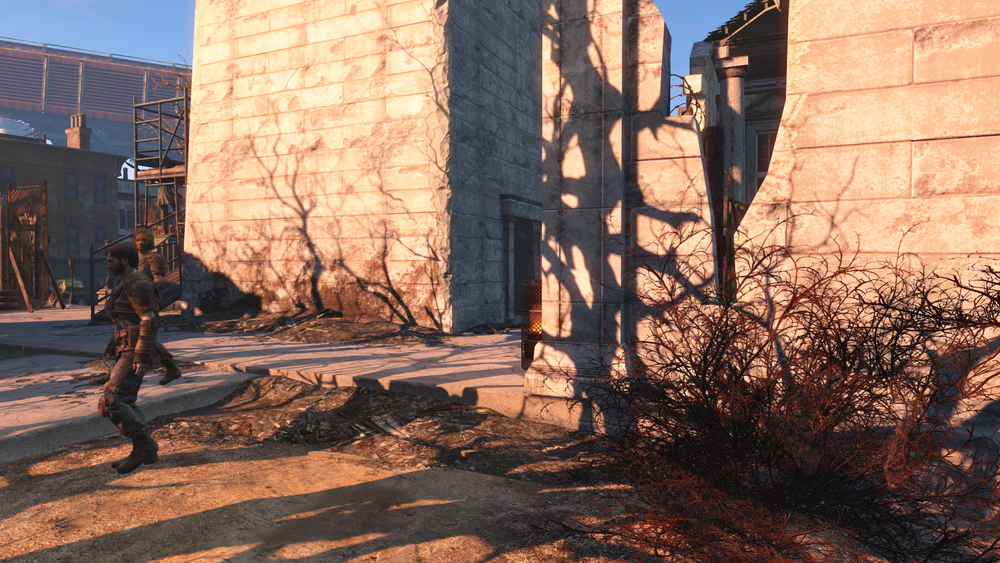 Couldn’t get exactly the same angle, due to an in-game building, but pretty close. The monument is open to climb every day of the week. I didn’t go this time, but I encourage you to come check it out if you’re in the area.</ 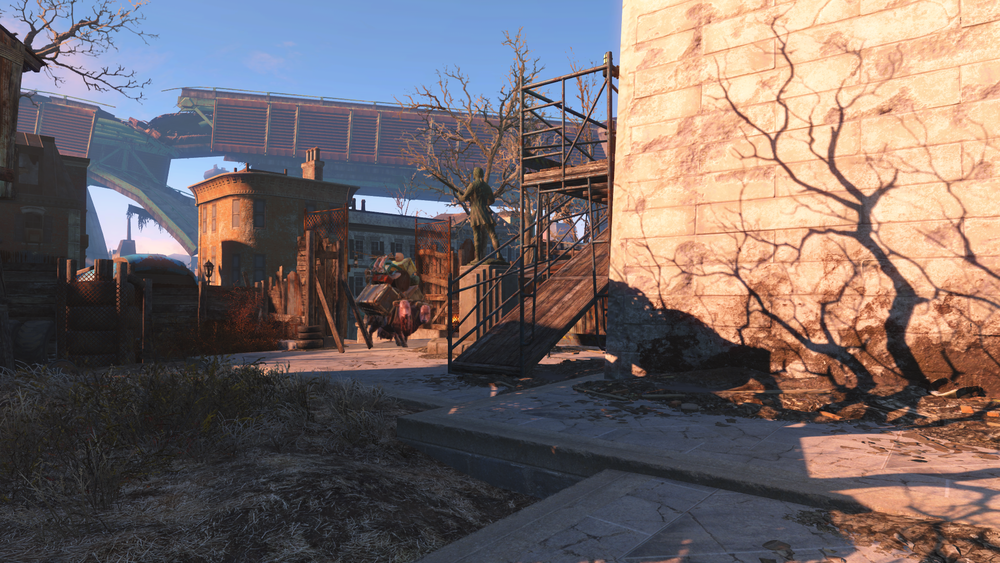 These pictures do a good job of showing the way the game compresses large areas. It’s a requirement; if the game world was as big as the real world, we’d get bored. Still quite impressive.

IRL Charlestown HS from East side of BH 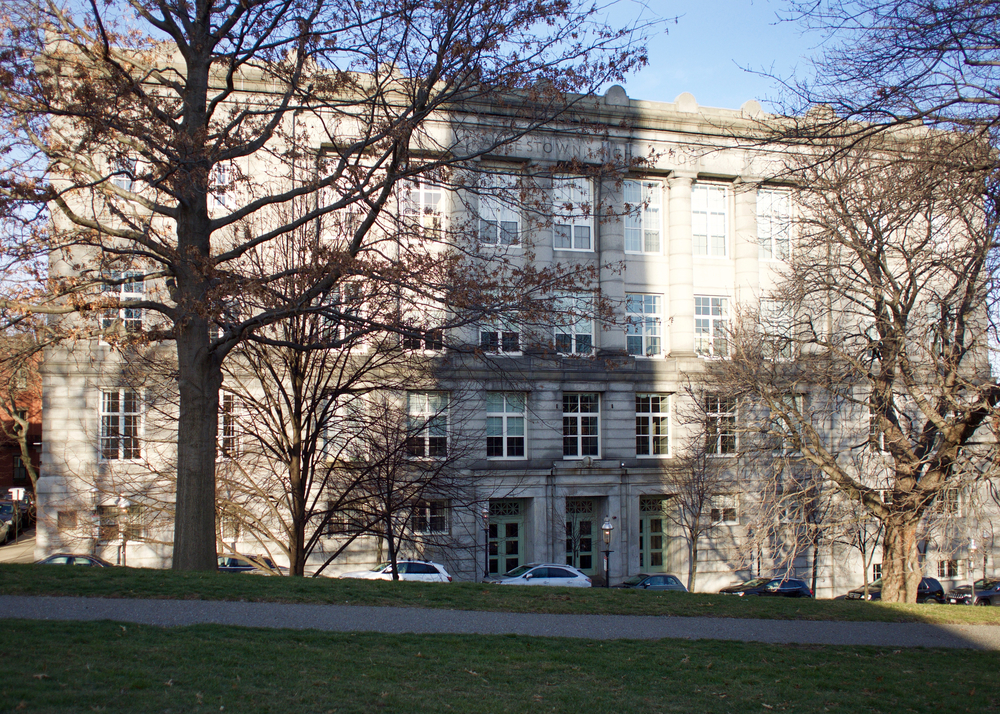 Facing east from the East side of the Exhibit lodge, there’s a sizable green space, then down the hill you can see what was the Charlestown High School. I believe it’s condos, now. Gorgeous building I would love to see represented in-game.

IG “Charlestown High” from East side of BH 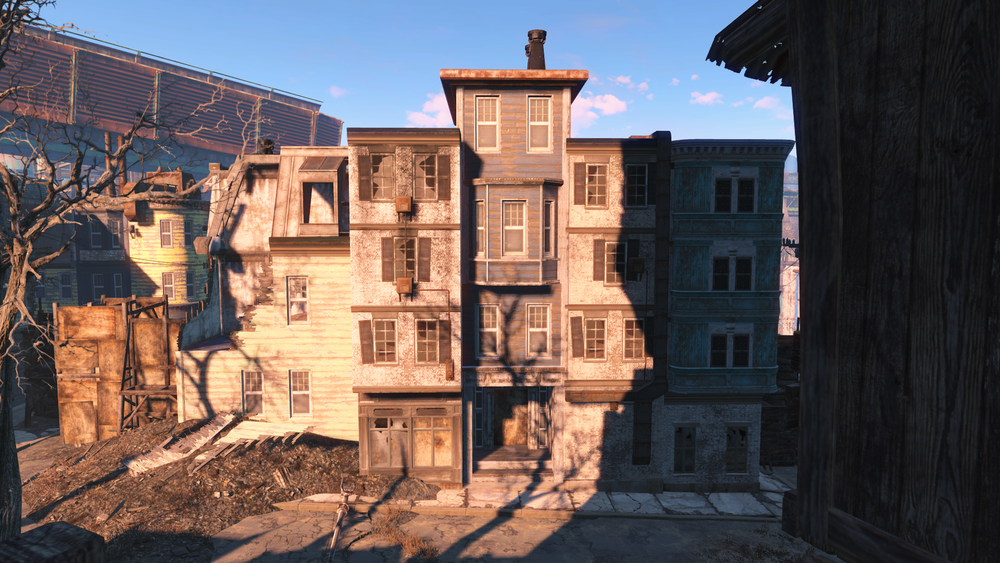 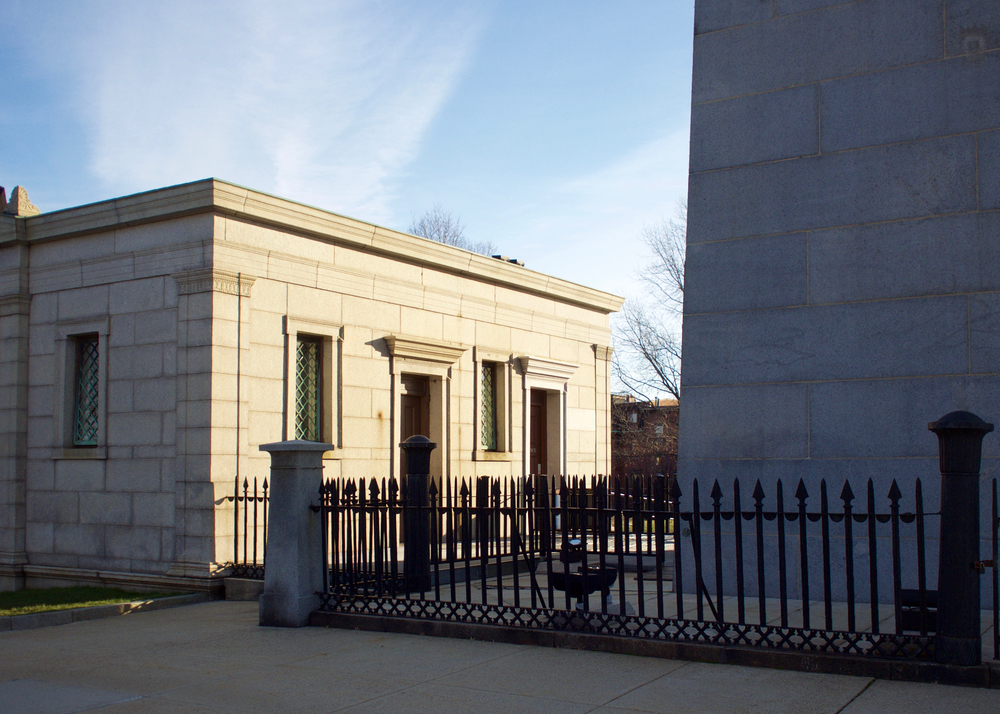 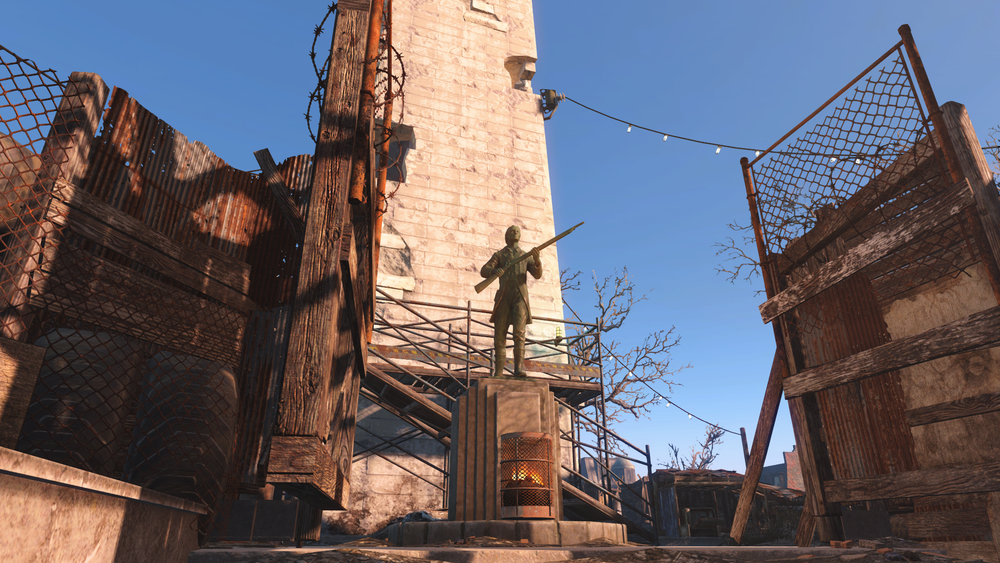 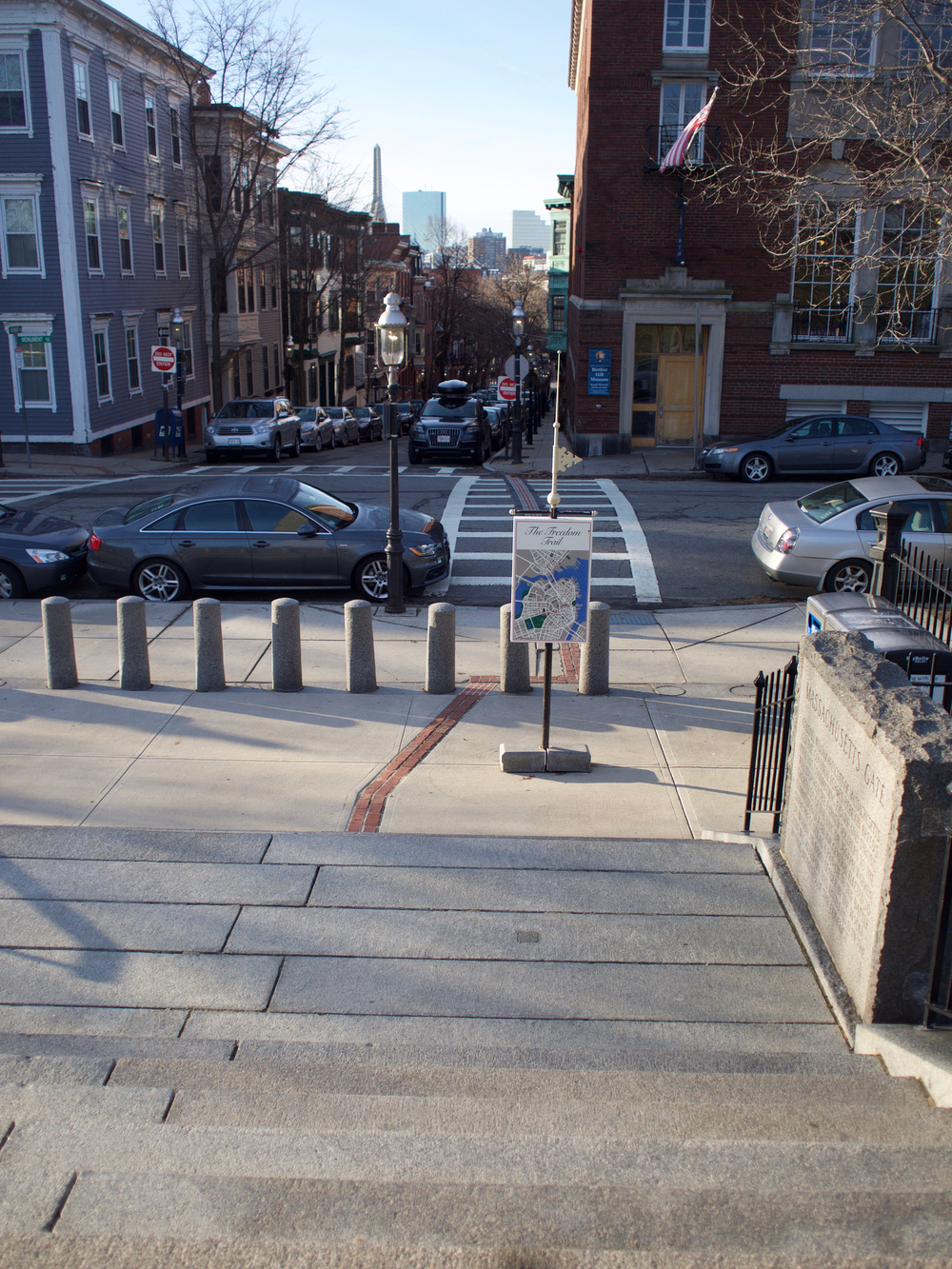 Yes, all in a 700’ radius, there’s Monument Square, Monument Ave., and Monument St. Getting delivery can be a challenge in this area. 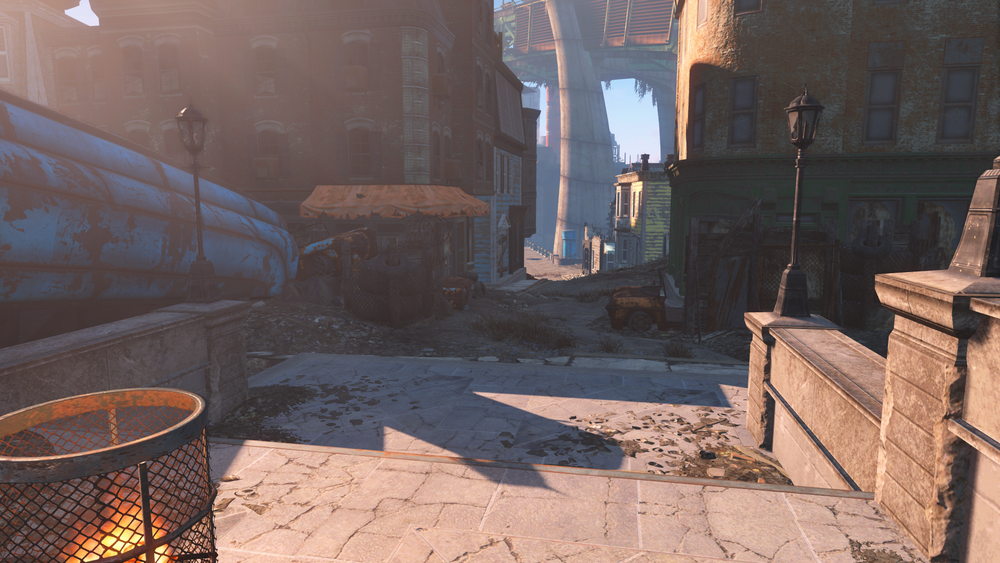 IRL Long of Monument and Main Entrance from South 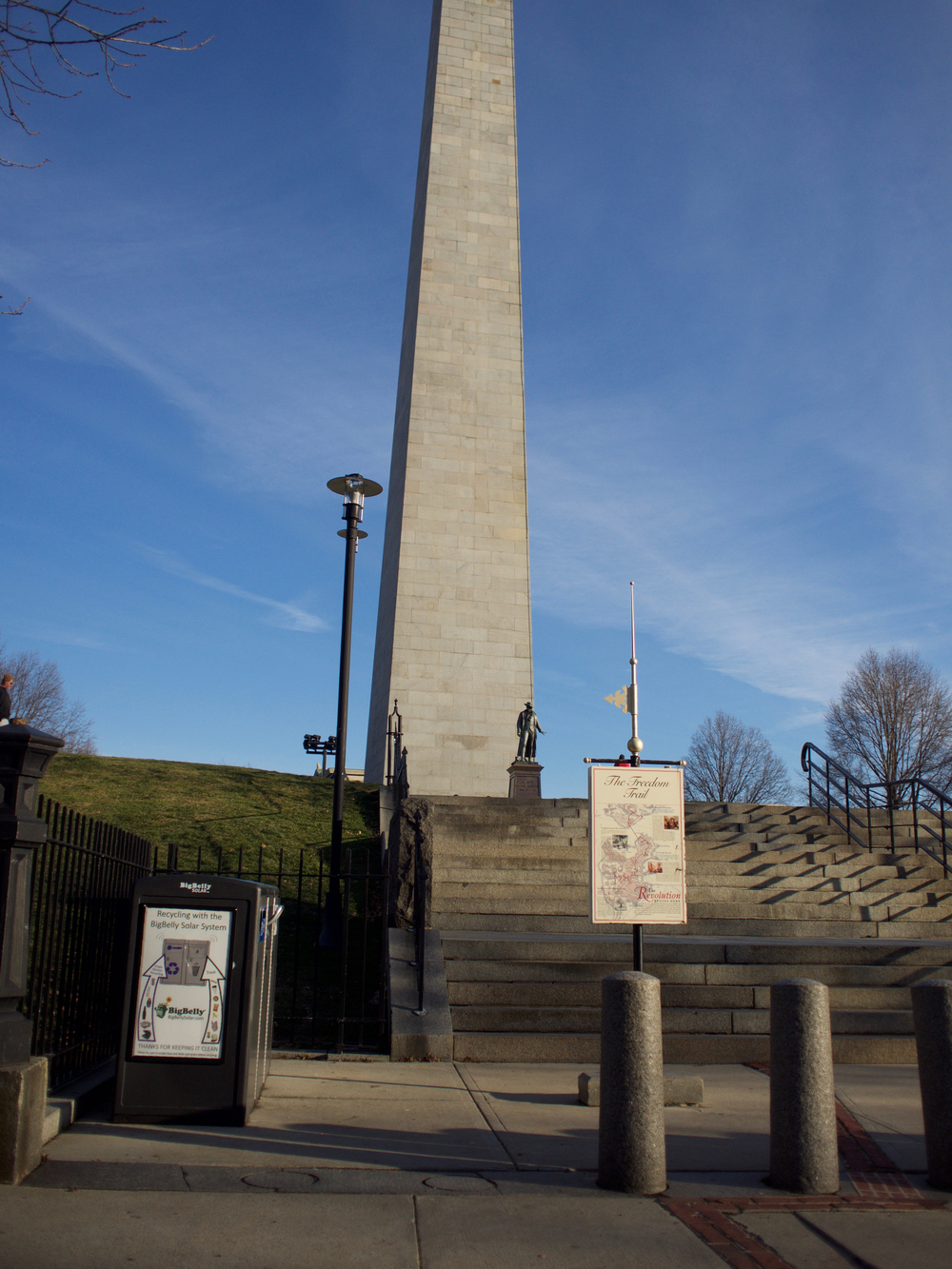 IG Long of Monument and Main Entrance from South Again, I couldn’t quite get the angle right in-game due to buildings, but not too bad. 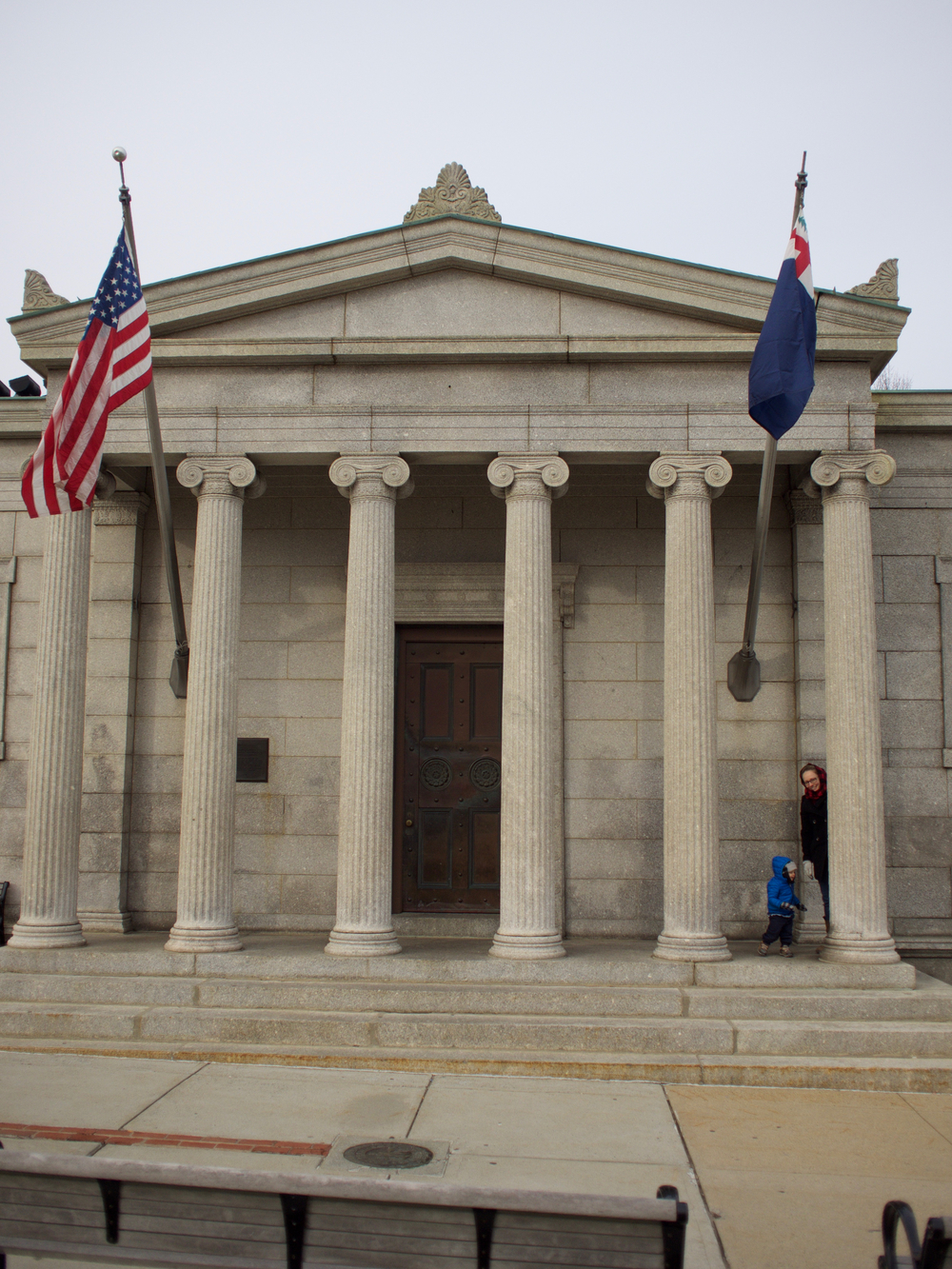 My wife and son make a cameo. If you ever wondered, weather along the Atlantic seaboard changes about as quickly as in-game weather. We went from sunny, clear skies to completely overcast in a matter of the 90 minutes it took to go grocery shopping, come home, and get outside to play. That’s why most of the pictures are blue skies, but this one is overcast. 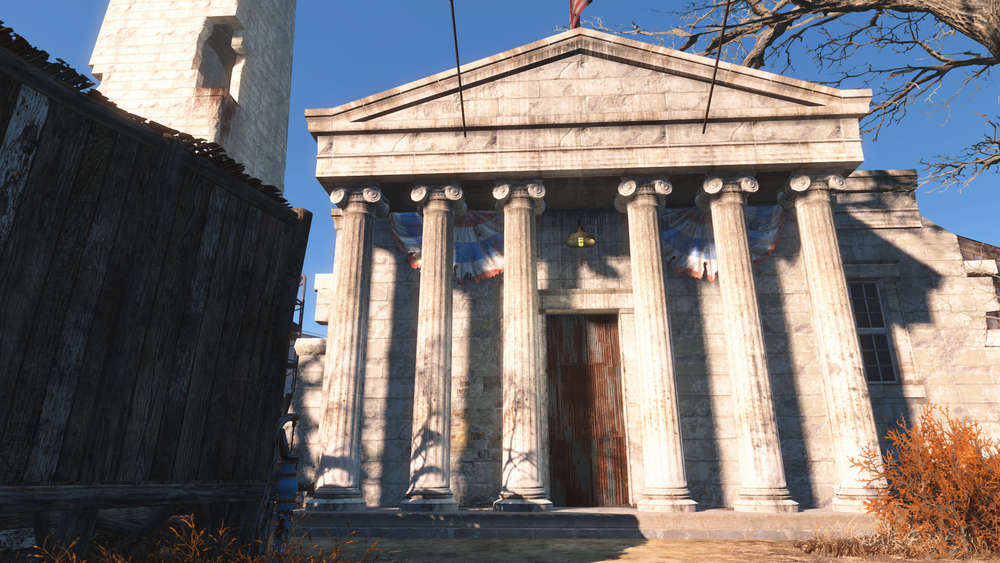 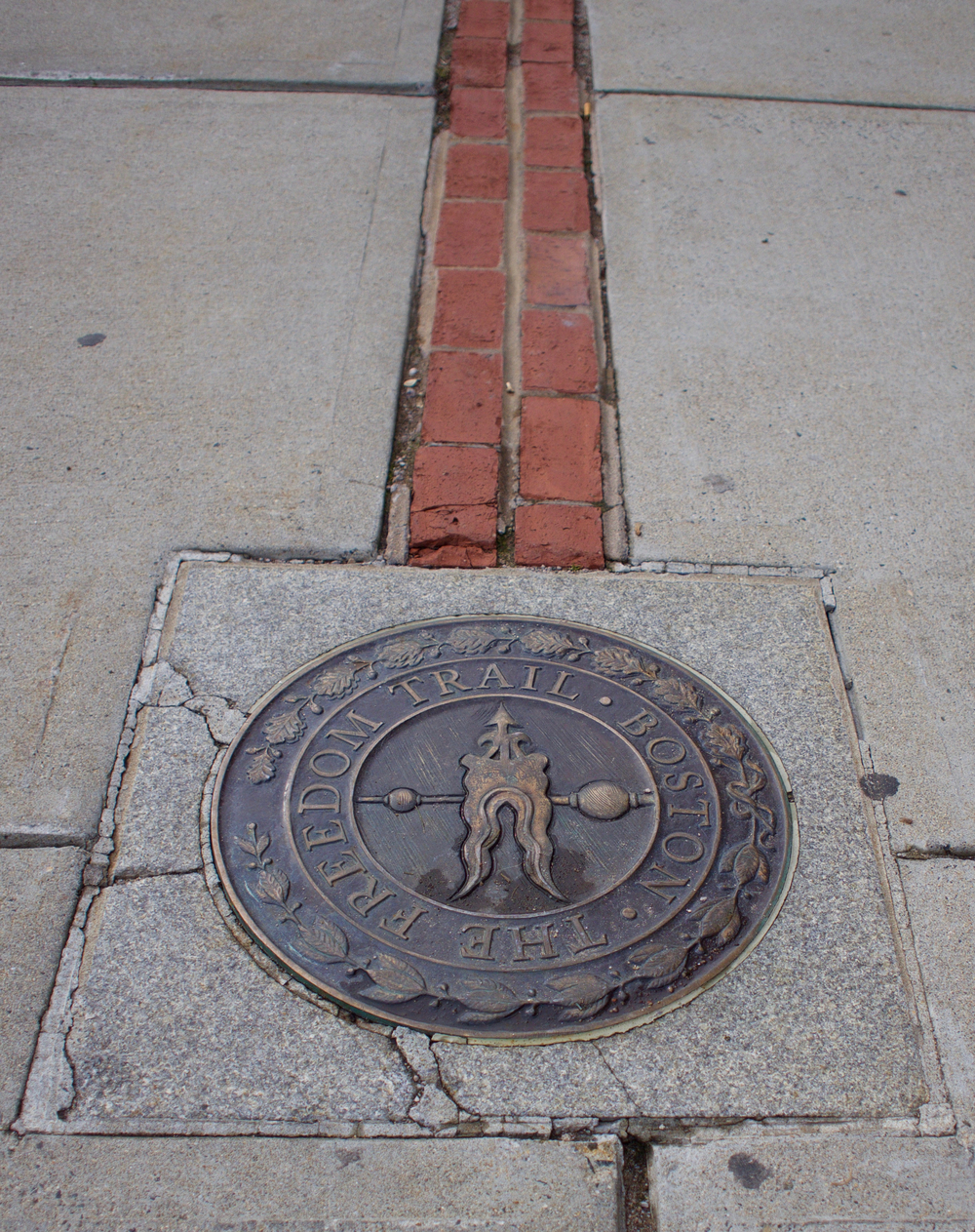 The Freedom trail actually starts at the Bunker Hill Monument. I have a map later on in the gallery.

IG Piper Standing Approx. where Trailhead Marker Would Be 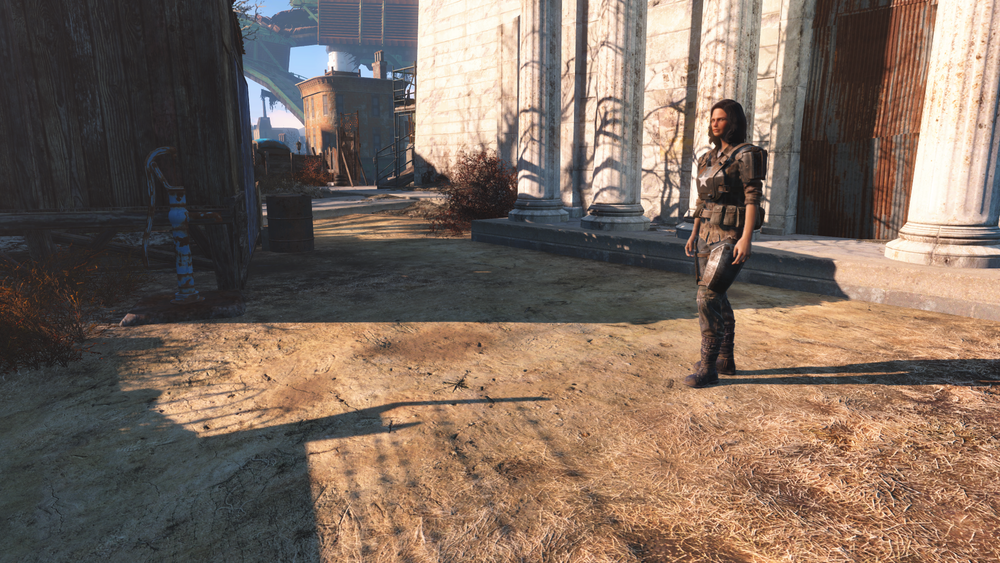 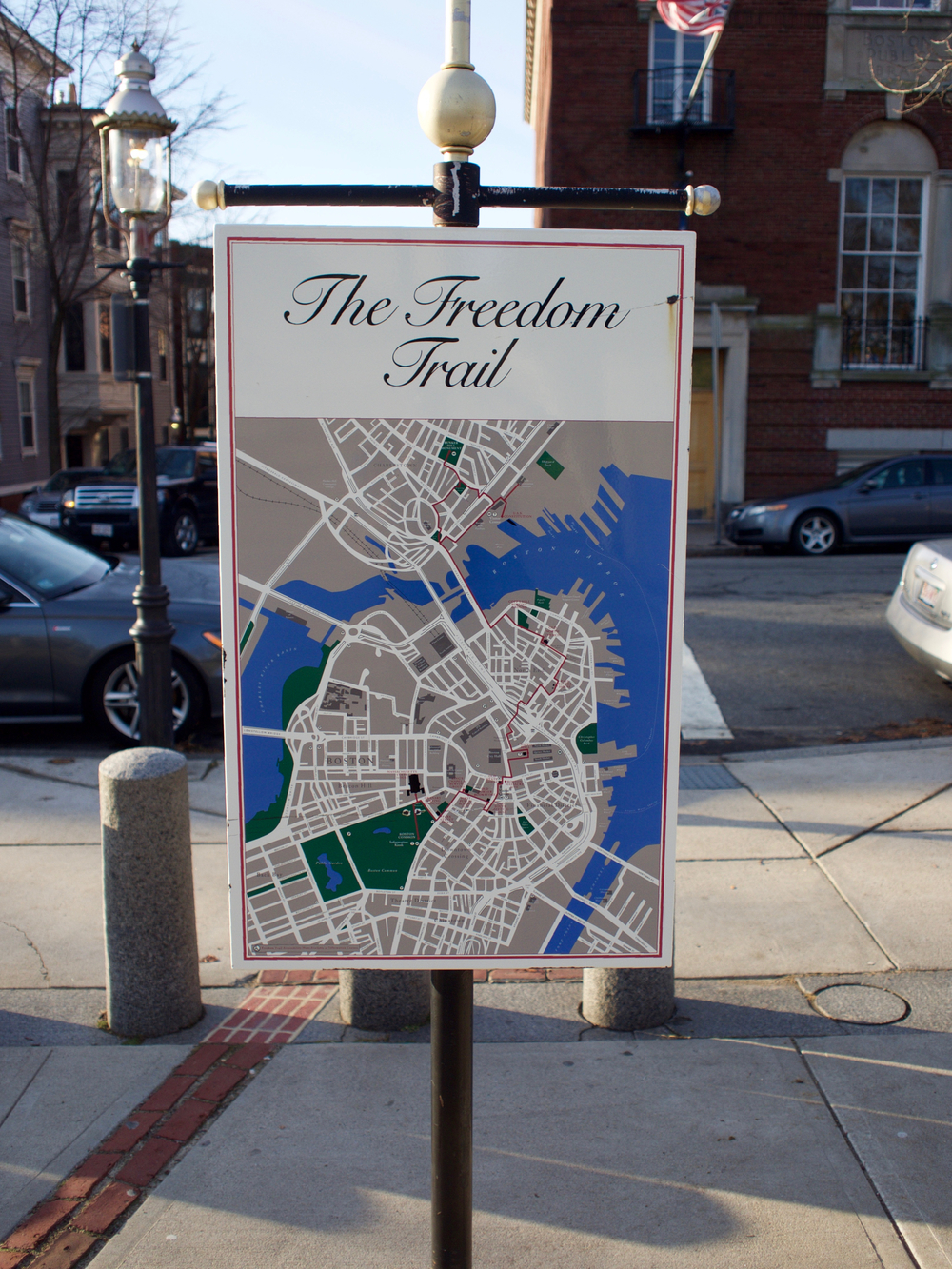 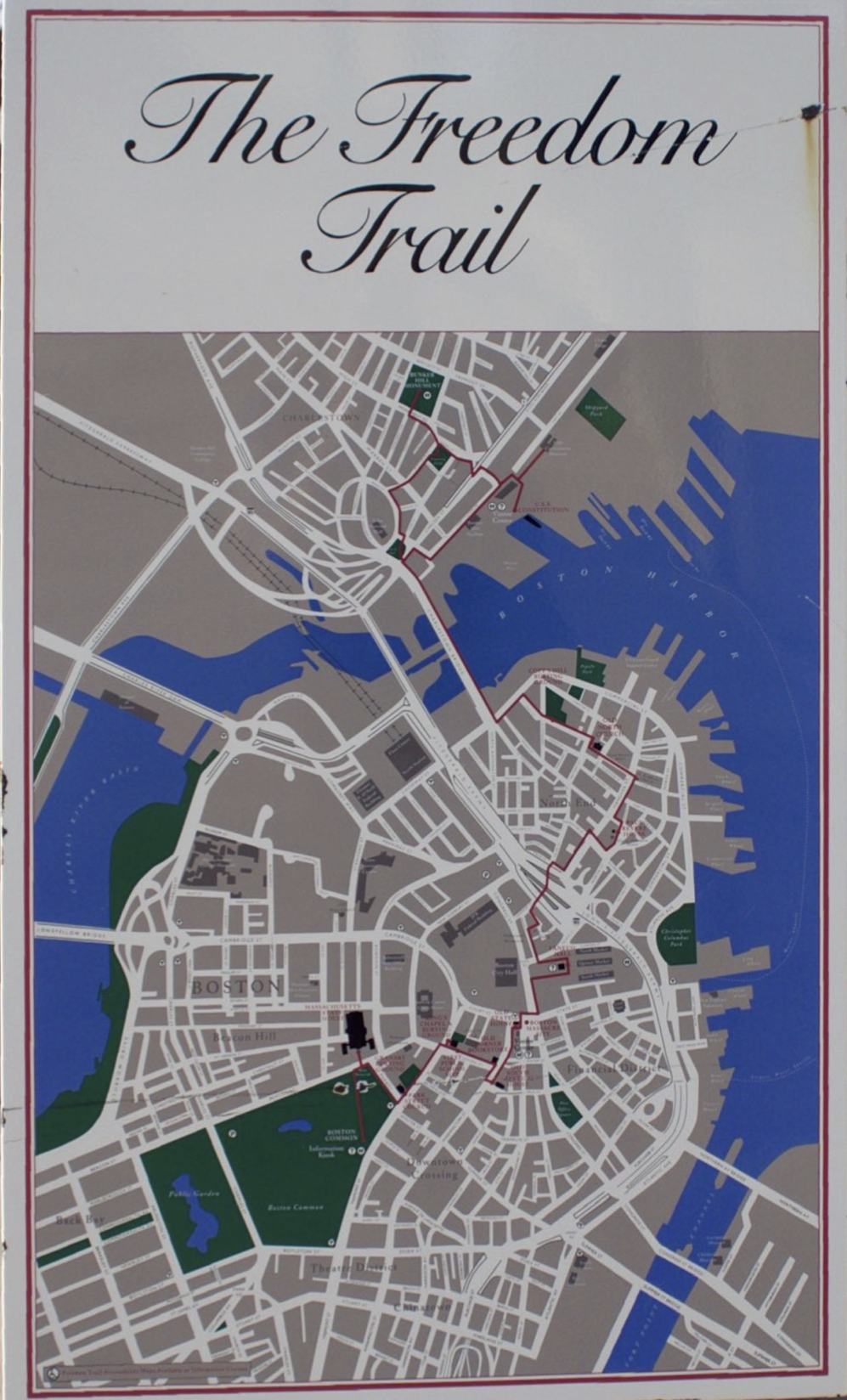 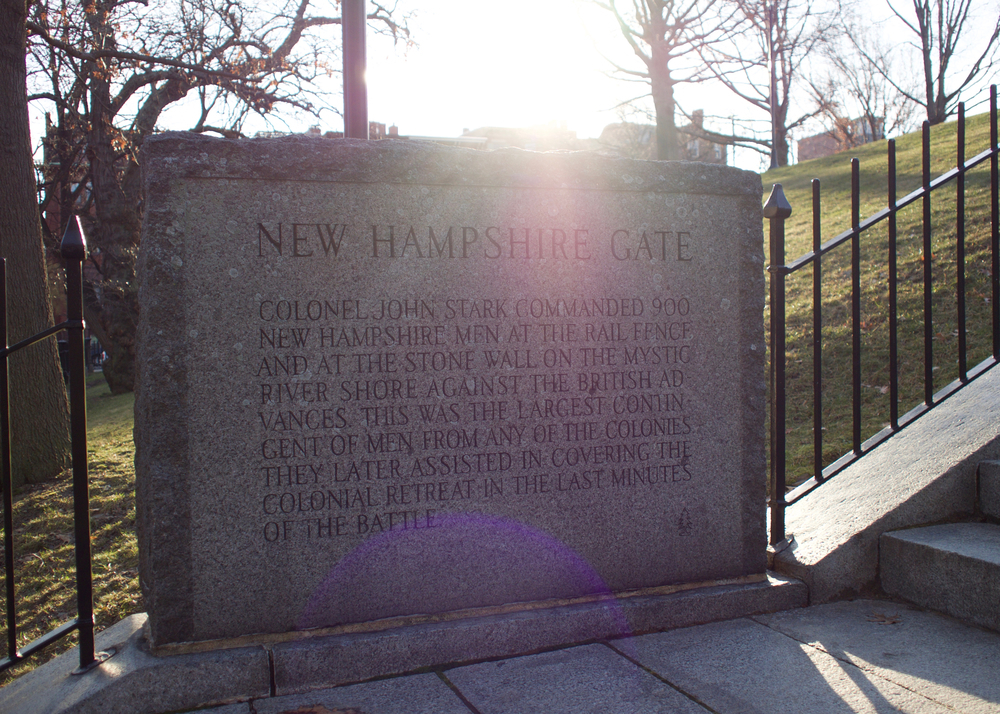 The New Hampshire Gate doesn’t exist in-game, since there’s no entrance on the north side of the Bunker Hill. 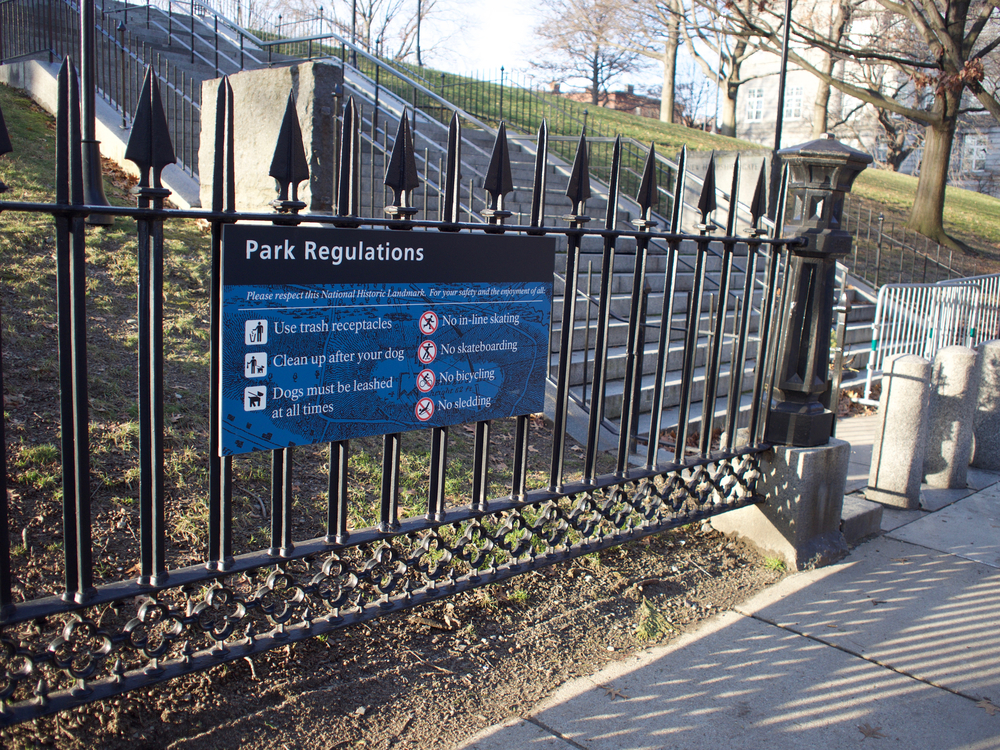 Dogmeat would be SOL. He’s never on a leash. And, tbh, I’ve never once cleaned up after him.

Thanks for taking the time!