An attractive and multi-functional workspace

I’ve been fortunate enough to have a dedicated workspace in each of the houses and apartments I’ve lived in since 2006, when I bought my first house. Some have been better than others, and the current setup isn’t done1, but it’s pretty good and I’m happy with where it is, now. Since my last role was about 80% remote, I knew how important a good home setup was prior to the pandemic forcing many of us to think more about how to be productive from home.

Each of the things are chosen because they help me do more, or are pleasing while I’m at my desk. I won’t say that the desk is always this clean, but it’s never too far from it. It’s important that I want to be at my desk, and to achieve that, I need stuff that is both pleasing and functional. 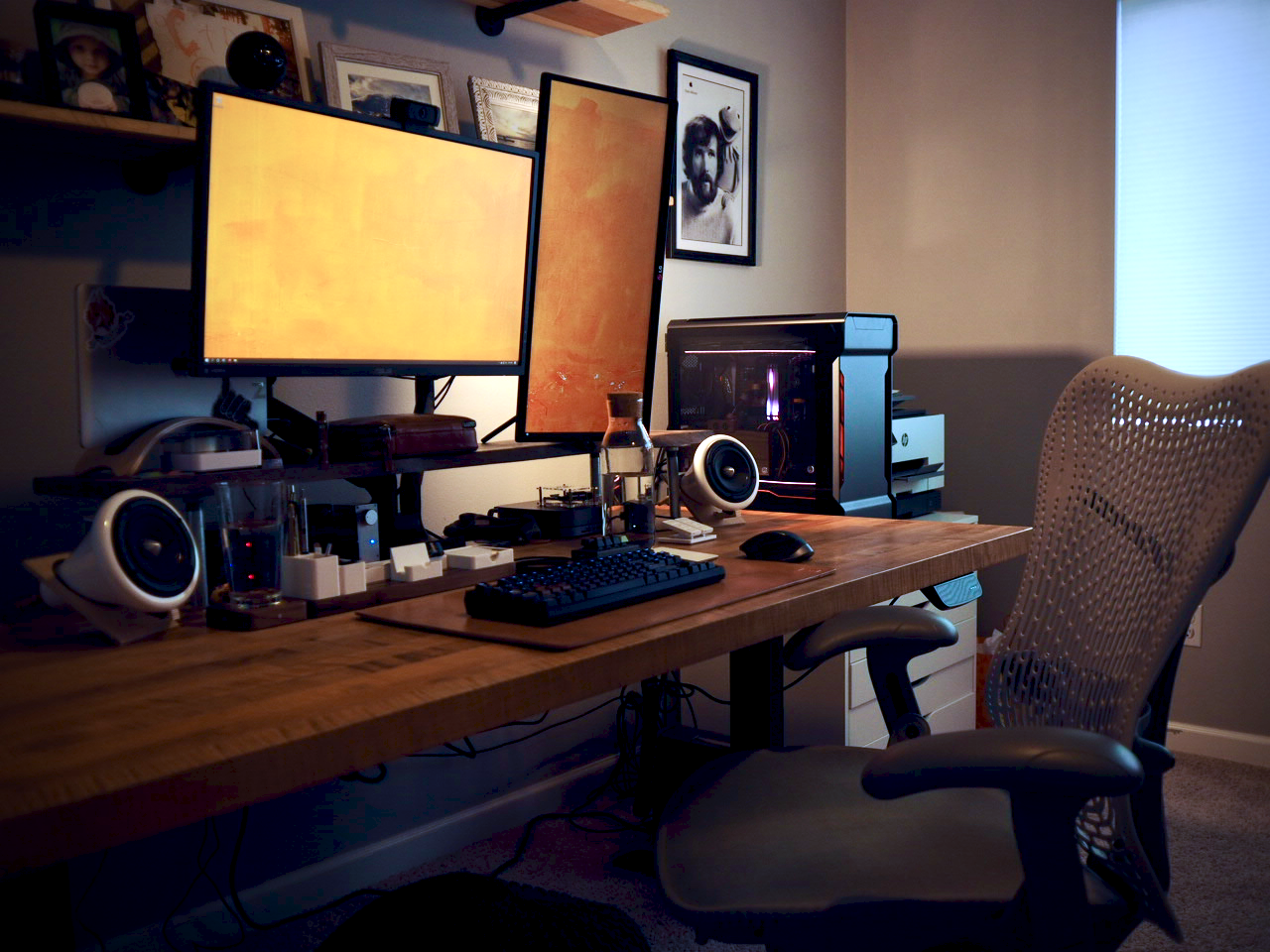 The space is where I do almost all of my nerding both for work and fun, and when the weather is too poor to get outside it needs to convert into a cycling training space. 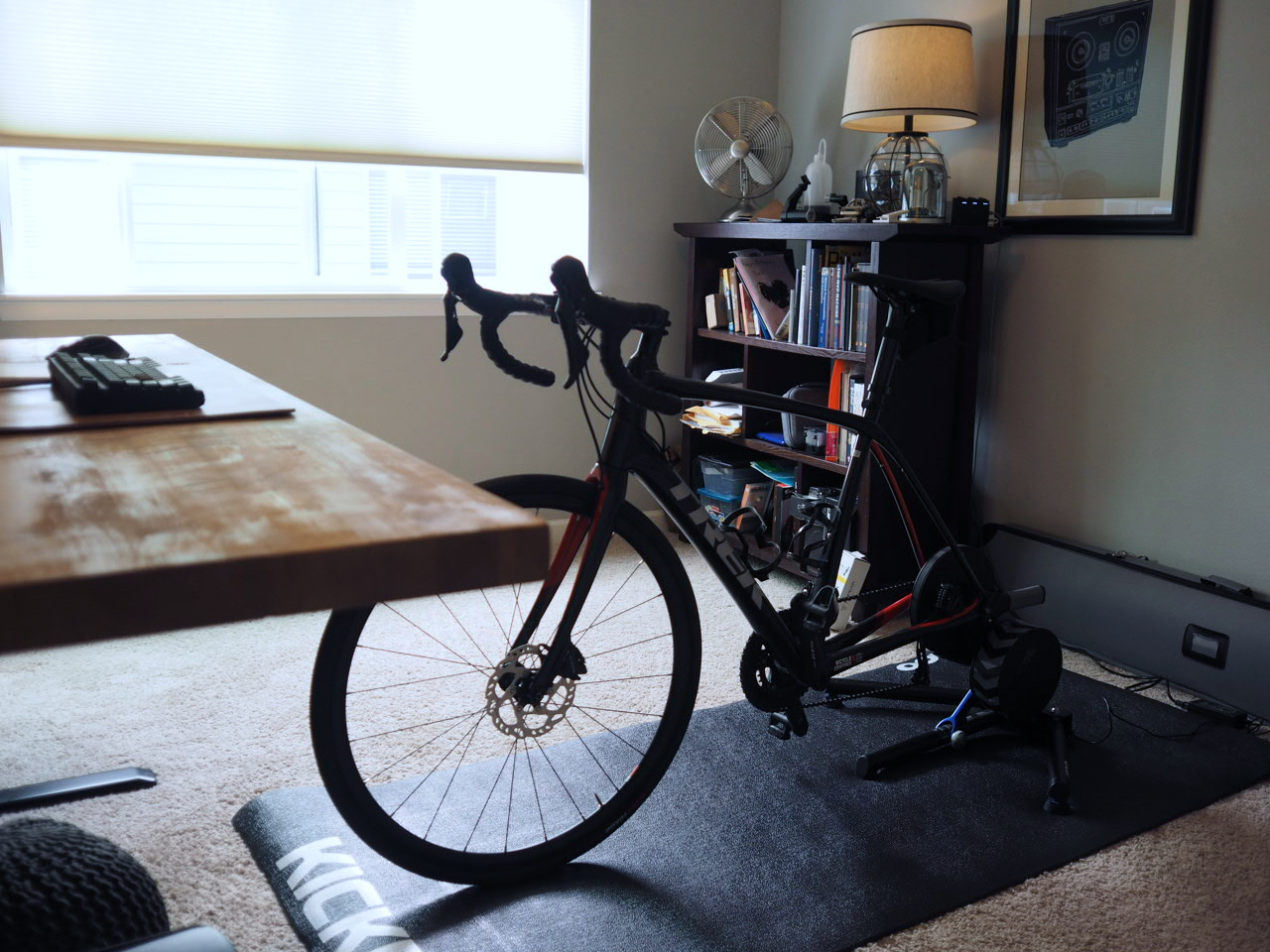 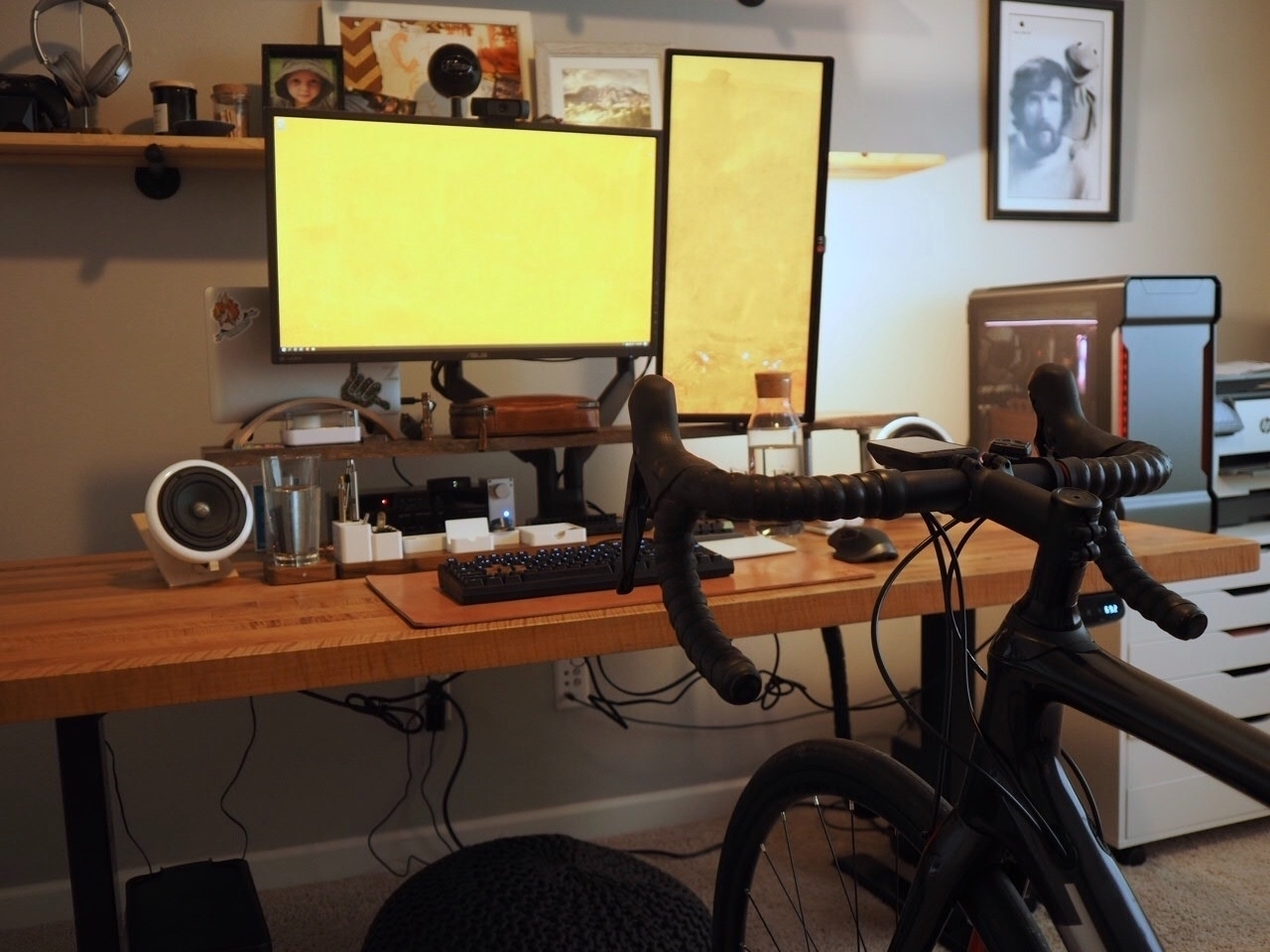 I have my 2019 Trek Domane SL5 Disc on a Wahoo Kickr from 2017. It connects to my PC via a USB attached ANT+ dongle, and the PC runs Zwift. I’ve done exactly 2 rides with this setup, but I wanted to get it going before I went down for a foot surgery, so I’d have it ready to go as soon as I’m clear to train again - about a month from now. I keep three computers at my desk permanently. 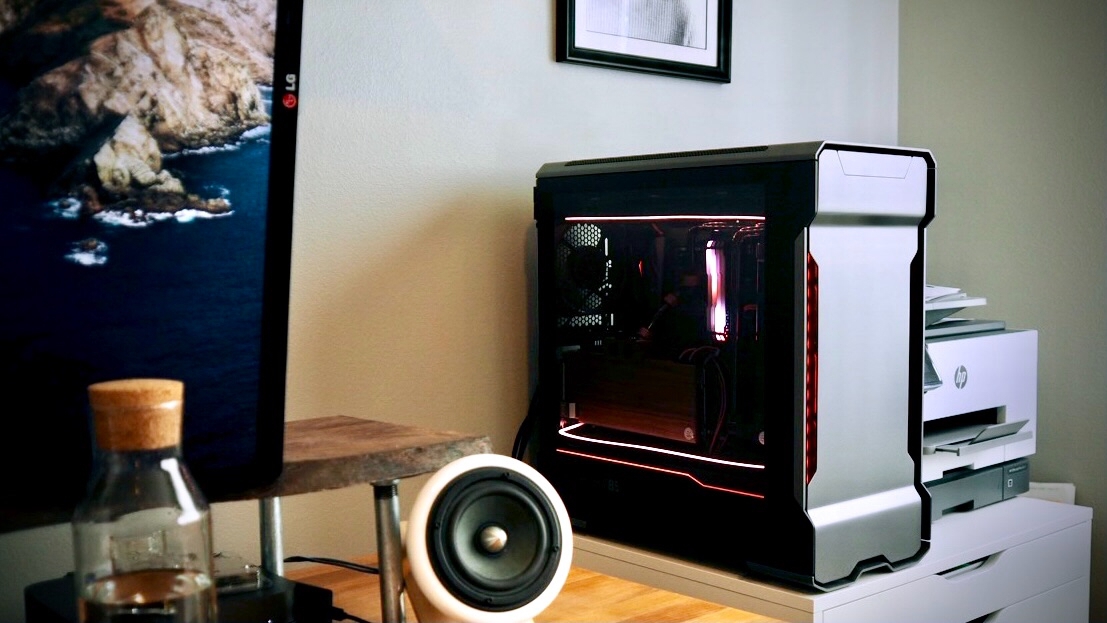 The speakers are Joey Roth, and the desktop organization is Ugmonk’s Gather System.

I use two Tripp-Lite B004-DPIUA4-K KVMs to allow me flexibility for moving my displays between the computers. I covered the far-too-bright indicators with black Fastcap stickers, so they don’t distract me while I work.

I’m currently using a WASD Code 87-key with Cherry MX Browns and O-Rings. The WASD keys are bespoke Mechanicallee’s Walnut walnut keycaps. I parted with my WhiteFox True Fox some time ago, and I had a Kira with Hako True switches, that I loved typing on but I was never comfortable with the layout. Sold it on, as well. Nice thing about mechanical keyboards is that they retain their value. 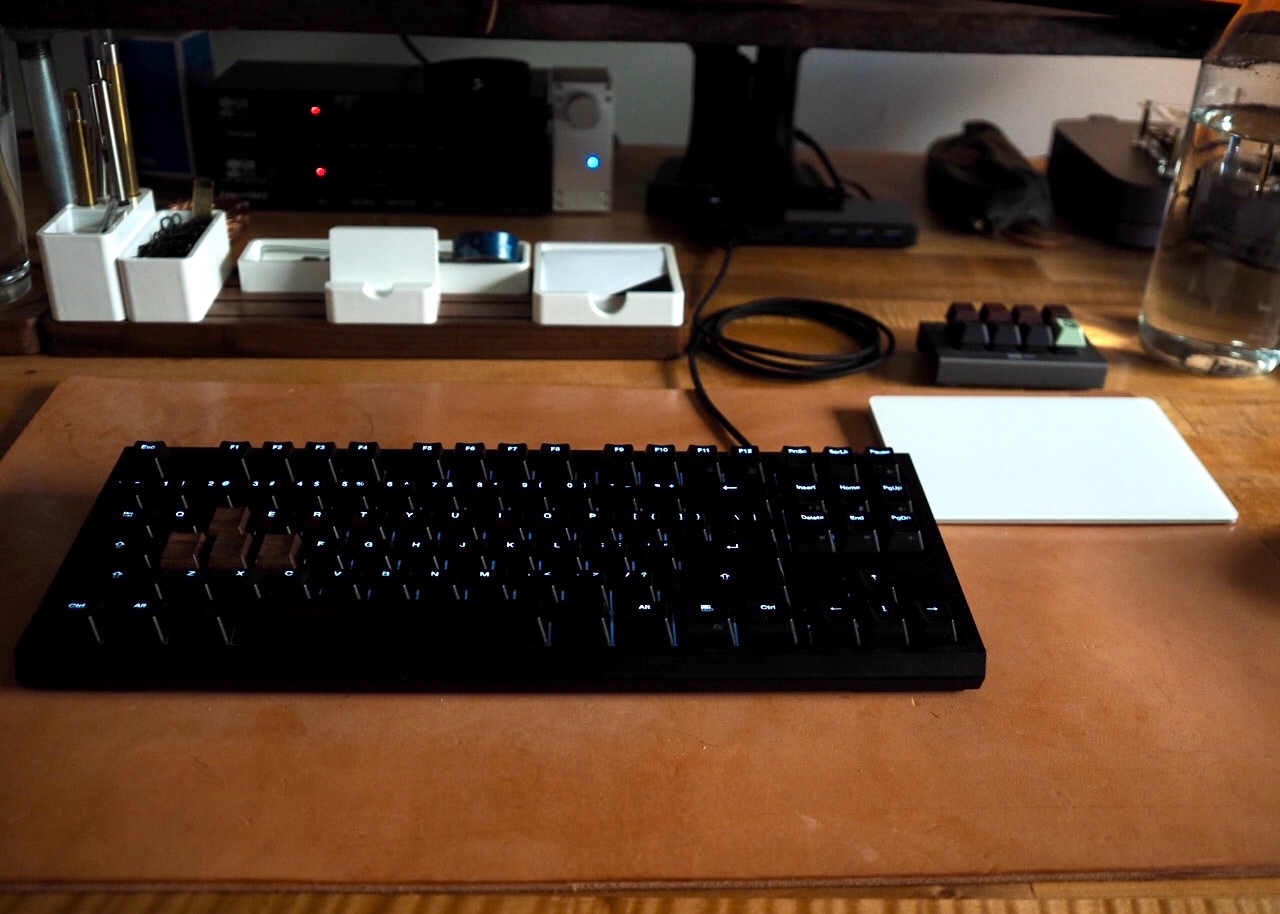 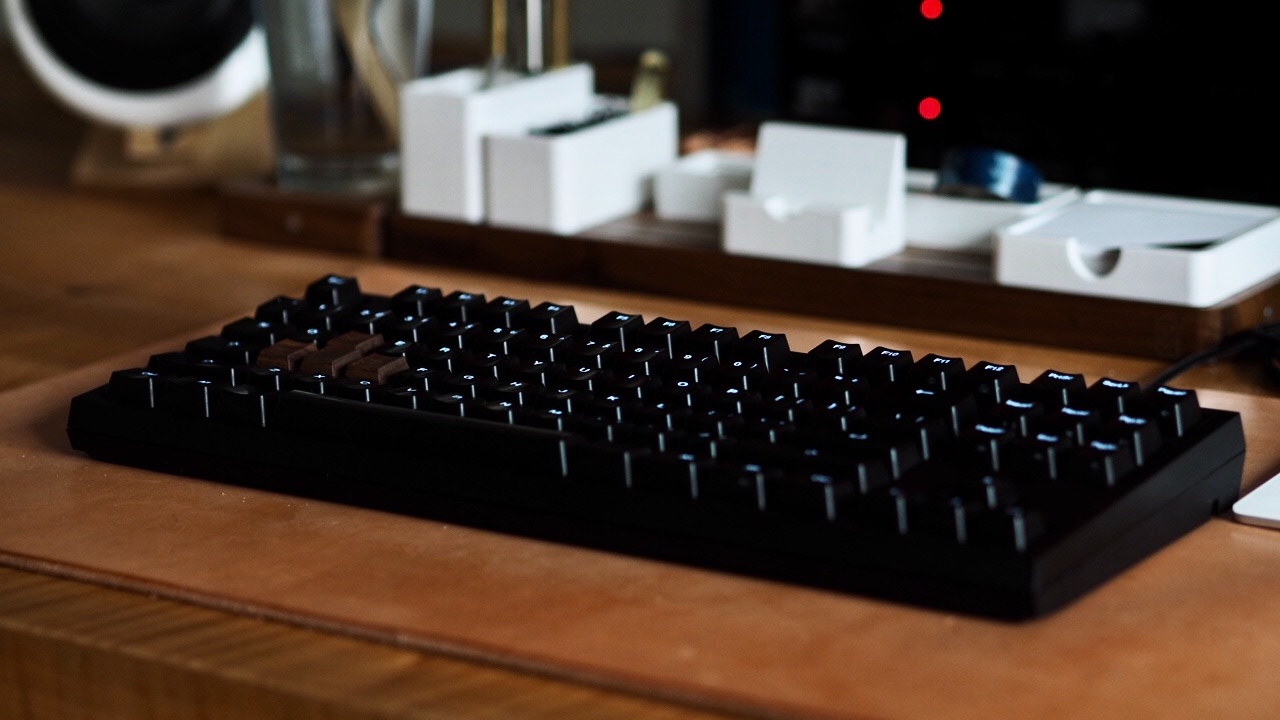 Finally, in my Ikea drawer/computer stand and storage drawers, I put in a couple drawers of pick-and-pluck foam to better organize my gadgets. This one is for photos and video, and another is full of Raspberry Pis and components, with anti-static foam. It’s the old Alton Brown-ism “Organization will set you free.” 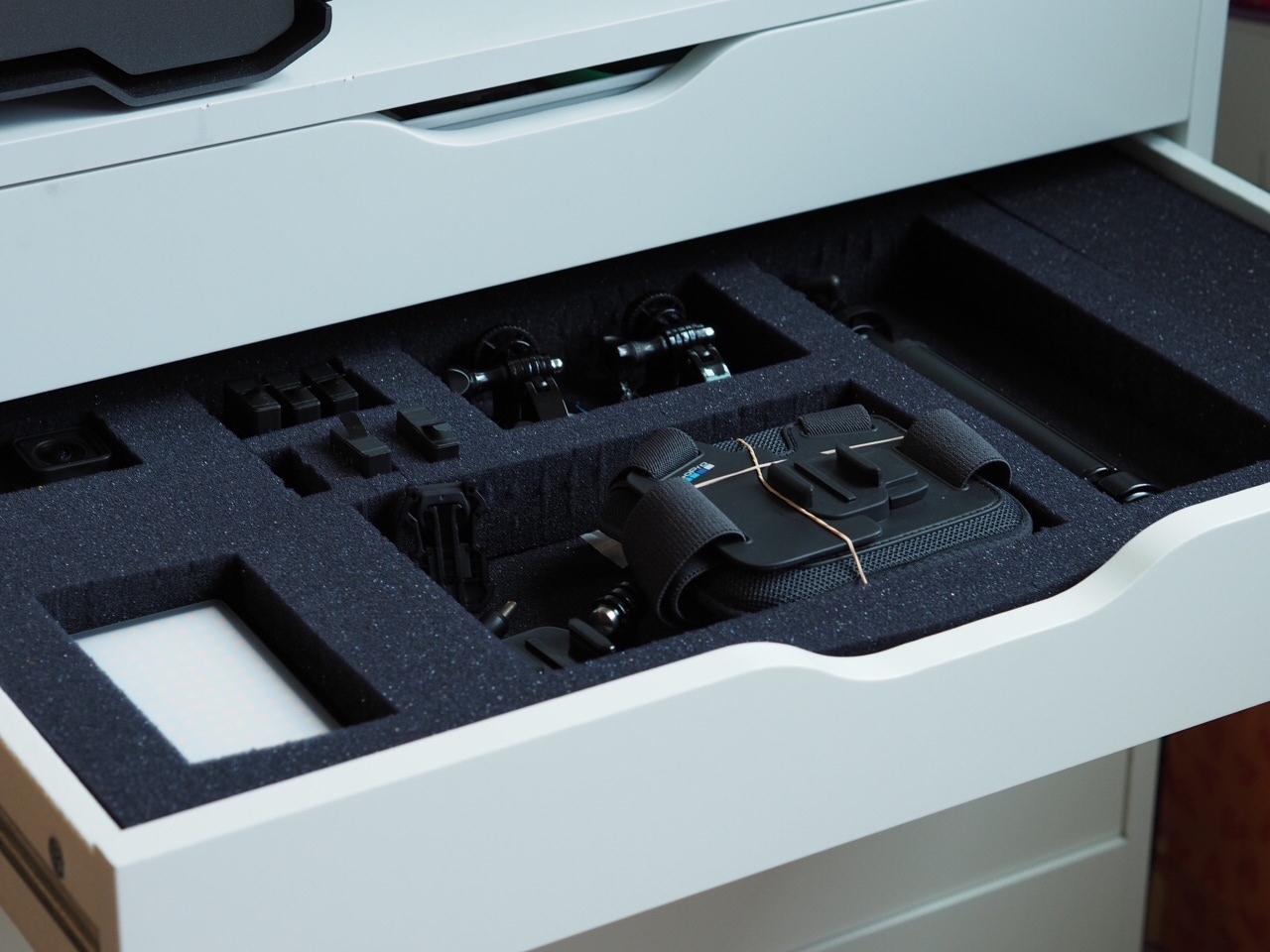